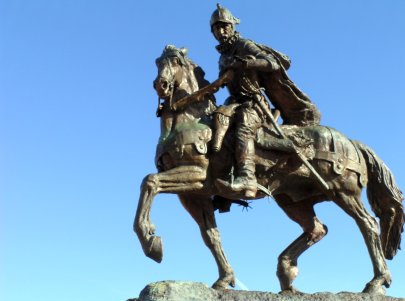 Juan de Oñate was a  conquistador who established the colony of New Mexico for Spain. During his despotic governorship, he vainly sought the mythical riches of North America and succeeded instead in unlocking the geographical secrets of what is now the southwestern United States.

The son of wealthy parents in Zacatecas, New Spain, Oñate gained added status when he married a granddaughter of Hernán Cortés. His request to conquer and govern New Mexico was approved in 1595, but it was not until three years later (January 1598) that his expedition of 400 settlers finally began its northern journey. They crossed the Rio Grande at El Paso in July 1598, and Oñate established headquarters at that river’s confluence with the Chama at San Juan. From there he sent out small parties in all directions to search for treasure—which did not exist. Disillusioned, many settlers wanted to return to New Spain, but Oñate refused to let them go and executed several of the leading malcontents. His treatment of the Native Americans was even more brutal.

In June 1601 Oñate set out to find the legendary treasure of Quivira (in what is now central Kansas) but returned in November empty-handed and found, moreover, that most of his colony had departed during his absence. In a last attempt to recover his prestige, he led (1604) 30 soldiers on an expedition west to the Colorado River and south to the Gulf of California, but he still found no gold. He resigned in 1607 and later stood trial for his crimes while governor. Found guilty of cruelty, immorality, and false reporting, he was exiled from the colony, fined, and deprived of his titles. Appeals brought a reversal of his sentence (1624) but not restoration to office.